Chris Rosebrough issued the following warning on the dangers of following Brian Houston and his Hillsong movement,

The Bereans, “were more noble than those in Thessalonica; they received the word with all eagerness, examining the Scriptures daily to see if these things were so.
— (Acts 17:11)

We’ve issued a Berean Advisory to warn people about the dangers of Brian Houston of Hillsong Church in Sydney, Australia. Below you will find resources that will help you understand why we believe Houston’s teaching is dangerous and should be avoided by all Christians. Mature believers should also take the time to understand the nature of Houston’s false teaching so that they may be ready to explain to less mature believers why Houston should be avoided.Your assignment, as a good Berean, is to listen to, watch and read the resources below with an open Bible.

The resources are as follows: Three sermon reviews from the Fighting for the Faith Radio program analyzing the content of Houston’s preaching and the way in which he twists the scriptures, Two videos by Justin Peters that explain the Word of Faith Heresy and provide an in depth Biblical refutation of it, Recommended books that will help you better understand the dangers of the Word of Faith Heresy and how to Biblically refute it.

“A Different Gospel,” a book for the heart and the mind, is must reading for those who seek reliable information about the “Word of Faith” movement.

Every Christian should read this book in order to be aware of the dangerous implications of the widespread and cultic “Word of Faith” movement preaching what is popularly known as “”Name It and Claim It”” theology. “A Different Gospel” is a bold and revealing examination of the biblical and historical basis of this movement. This new and revised edition is complete with a foreword by Hank Hanegraaff, author of “Christianity in Crisis,” and a new afterward by D. R. McConnell.

The author knows the movement first hand and has a heart for those snared by it. He is also an academically trained observer who has based his work on careful historical and biblical analysis. McConnell warns of the movement’s cultic nature in its doctrine of healing and its understanding of the atonement and demonstrates how far the movement’s doctrine of prosperity is from Scripture’s true teaching. Click here to purchase A Different Gospel 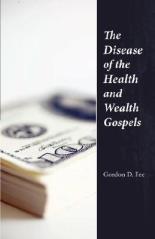 Does God will that the true believer in Christ be in good physical health? Is a Christian promised good financial health by virtue of his or her faith in Christ? If the Christian does not experience these blessings, must we assume that he or she is outside the will of God? Gordon Fee provides a provocative discussion and a direct challenge to all who struggle with these issues. Perhaps no other issues more directly affect the lives of professing Christians as do the issues of health and wealth and their relationship to the will of God. In Disease of the Health & Wealth Gospels, Dr. Gordon Fee looks at the treatment of these two themes as frequently found in popular Christian teaching. Based on solid exegesis of the Scriptures, looking at each theme separately, this books suggests that there may be yet a “more excellent way” in viewing these emotionally charged issues. Gordon D. Fee is Professor Emeritus of New Testament Studies at Regent College, Vancouver, British Columbia, and an ordained minister of the Assemblies of God. Considered to be one of the foremost experts in textual criticism of the New Testament of the Bible, Dr. Fee was a member of the editorial board that composed both the New International Version (NIV) and Today’s New International Version (TNIV) translations of the Bible. He is also the author of numerous commentaries and books on biblical interpretation, including the popular introductory work How to Read the Bible for All Its Worth (co-authored with Douglas Stuart). Click here to purchase The Disease of the Health and Wealth Gospels.

I pray that these resources help you or help you help someone who has been snared by the false teaching of Brian Houston.

Will you please share this resource using the social media buttons below.