Is Brian Houston using Christian Press conferences to peddle the prosperity gospel while in the same breath denying it?

BRIAN HOUSTON HAS NEVER BELIEVED IN A PROSPERITY GOSPEL?

Eternity magazine had an article on Brian Houston this August, 2014. 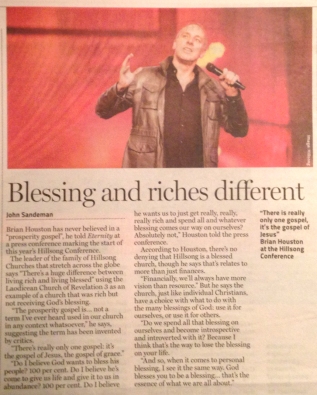 Brian Houston was reported saying the following at a press conference,

“Brian Houston has never believed in a “prosperity gospel”, he told Eternity at a press conference marking the start of this year’s Hillsong Conference.”

Brian Houston has never believed in a “prosperity gospel”?

Really Brian? Then how on earth do people reconcile your statement to this?

Why did the ABC’s ‘Chaser War on Everything’ do this skit on your prosperity gospel? (Even the Chaser team knows what the prosperity gospel is. And for someone who gets paid $300,000 annually as a motivational speaker, you don’t know?)

Even your ex-members will tell you Brian that you are a “peddler” of the prosperity gospel.

Even you Brian have been caught by the media preaching the prosperity gospel. They even have other Hillsong teachers and members repeating your false gospel in their report.

So you still don’t know what it is?

Brian Houston has never believed in a “prosperity gospel”, he told Eternity at a press conference marking the start of this year’s Hillsong Conference.

The leader of the family of Hillsong Churches that stretches across the globe says “There’s a huge difference between living rich and living blessed” using the Laodicean Church of Revelation 3 as an example of a church that was rich but not receiving God’s Blessing.

“The prosperity gospel is… not a term I’ve ever heard used in our church in any context whatsoever,” he says referring to Hillsong Church, suggesting the term has been invented by critics.

According to Houston, there’s no denying that Hillsong is a blessed church, though he says that’s relates to more than just finances.

“Financially, we’ll always have more vision than resource.” But he says the church, just like individual Christians, have a choice with what to do with the many blessings of God: use it for ourselves, or use it for others.

“Do we spend all that blessing on ourselves and become introspective and introverted with it? Because I think that’s the way to lose the blessing on your life.

And so, when it comes to personal blessing, I see it the same way. God blesses you to be a blessing… that’s the essence of what we are all about.”