HILLSONG PUBLICLY LYING IN THEIR CAMPAIGNS.

We shouldn’t be the only group identifying that Hillsong is simply lying to Christians all around the world.

If their inspiration was not from God then where did it come from? The two options are human imagination or demonic deception. While human beings don’t need help to lie, lying is associated with Satan. God labels Satan a liar and acknowledges those who do, are of his nature.

“Now the serpent was more crafty than any other beast of the field that the LORD God had made. He said to the woman, “Did God actually say, ‘You shall not eat of any tree in the garden’?” Genesis 3:1

“If you are the Son of God,” [Satan] said, “throw yourself down. For it is written:
“ ‘He will command his angels concerning you,
and they will lift you up in their hands,
so that you will not strike your foot against a stone.’c ”
Jesus answered him, “It is also written: ‘Do not put the Lord your God to the test.’” Matt 4:6-7

“You are of your father the devil, and your will is to do your father’s desires. He was a murderer from the beginning, and does not stand in the truth, because there is no truth in him. When he lies, he speaks out of his own character, for he is a liar and the father of lies.” Jesus, John 8:44

“For such people are false apostles, deceitful workers, masquerading as apostles of Christ. And no wonder, for Satan himself masquerades as an angel of light. It is not surprising, then, if his servants also masquerade as servants of righteousness. Their end will be what their actions deserve.” 2 Corinthians 11:13-15

These campaigns are very well marketed to deceive people with maximum impact. While we do believe that there is ethical marketing, Hillsong throws ethics and integrity out the door to deliberately ‘bamboozle’ people’s intellect and emotions. They manipulate people into believing that God’s blessing is on Hillsong to the point where it is appears they are the only ‘true’ church.

In this campaign, they want people to feel as though they are part of something “prophetic”. The problem is they are blatantly lying about God’s Word. (Just a reminder before reading, Samuel was a famous prophet in the Old Testamant.)

In 1 Samuel 3:10 is says, “The LORD came and stood there, calling as at the other times, Samuel! Samuel! Then Samuel said, ‘Speak, for your servant is listening’”

SPEAK, WE’RE LISTENING – is a declaration that we are indeed, listening.

They have an advertisment that is pretending to say something that God never said. How is that even operating with Christian integrity?

We ask these questions:

1. If this text is about Samuel saying “Speak, for your servant is listening”, then why is Hillsong deliberately perverting God’s Word so people cannot accept what God is saying at face value and making it about their church or their conference?

2. How can a people claim to be prophetic and “listening” when the leaders misapply the Word of God to mean something completely different and pass it off as “God said”?

3. Why did they take the liberty to badly rewrite God’s Word in an ad campaign?

The devil, in scripture, demonstrates how easy it is to twist the simple words of God to deceive man. His ministers follow in his fallen footsteps too quickly. 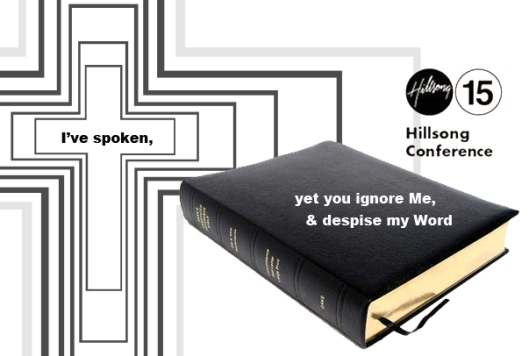 If you think we are being judgmental with Hillsong on this issue, how much more offended should you feel when you see them twist God’s Word to say something it doesn’t? We will leave you with the chapter itself so you can see just how wrong they were in doing what they did.

Now the boy Samuel was ministering to the LORD in the presence of Eli. And the word of the LORD was rare in those days; there was no frequent vision.

At that time Eli, whose eyesight had begun to grow dim so that he could not see, was lying down in his own place. The lamp of God had not yet gone out, and Samuel was lying down in the temple of the LORD, where the ark of God was.

And the LORD called again, “Samuel!” and Samuel arose and went to Eli and said, “Here I am, for you called me.” But he said, “I did not call, my son; lie down again.” Now Samuel did not yet know the LORD, and the word of the LORD had not yet been revealed to him.

And the LORD called Samuel again the third time. And he arose and went to Eli and said, “Here I am, for you called me.” Then Eli perceived that the LORD was calling the boy. Therefore Eli said to Samuel, “Go, lie down, and if he calls you, you shall say, ‘Speak, LORD, for your servant hears.’” So Samuel went and lay down in his place.

And the LORD came and stood, calling as at other times, “Samuel! Samuel!” And Samuel said, “Speak, for your servant hears.” Then the LORD said to Samuel, “Behold, I am about to do a thing in Israel at which the two ears of everyone who hears it will tingle. On that day I will fulfill against Eli all that I have spoken concerning his house, from beginning to end. And I declare to him that I am about to punish his house forever, for the iniquity that he knew, because his sons were blaspheming God,a and he did not restrain them. Therefore I swear to the house of Eli that the iniquity of Eli’s house shall not be atoned for by sacrifice or offering forever.”

Samuel lay until morning; then he opened the doors of the house of the LORD. And Samuel was afraid to tell the vision to Eli. But Eli called Samuel and said, “Samuel, my son.” And he said, “Here I am.” And Eli said, “What was it that he told you? Do not hide it from me. May God do so to you and more also if you hide anything from me of all that he told you.” So Samuel told him everything and hid nothing from him. And he said, “It is the LORD. Let him do what seems good to him.”

And Samuel grew, and the LORD was with him and let none of his words fall to the ground. And all Israel from Dan to Beersheba knew that Samuel was established as a prophet of the LORD. And the LORD appeared again at Shiloh, for theLORD revealed himself to Samuel at Shiloh by the word of the LORD.

16 thoughts on “Proof that Hillsong Conference is not listening to what God says – only to what leaders are imagining.”