The symbol Christians use to mark a Prosperity Heretic and their cult.

According to scripture, Brian Houston is not a Christian. This is because he continually throws people “into confusion” and is “trying to pervert the gospel of Christ.” This is why Christians and even media have difficulty getting straight, honest answers from him. Even scripture identifies these traits of a fraud:

“I am astonished that you are so quickly deserting the one who called you to live in the grace of Christ and are turning to a different gospel— which is really no gospel at all. Evidently some people are throwing you into confusion and are trying to pervert the gospel of Christ. But even if we or an angel from heaven should preach a gospel other than the one we preached to you, let them be under God’s curse! As we have already said, so now I say again: If anybody is preaching to you a gospel other than what you accepted, let them be under God’s curse!” Galatians 1:6-9

If that is not clear enough, scriptures also fulfil the exact criteria of what the media expose him to be:

“Their end is destruction, their god is their belly, and they glory in their shame, with minds set on earthly things.” Philippians 3:19

Men like Brian Houston stand condemned and are no way associated to the Christian faith. If they want to be considered a Christian church, saying that everyone sings their music does not qualify. They are attempting to look Christian and this only fulfils Jesus’ warning to watch out for false teachers/prophets who come to us disguised in shepherd’s/sheep’s clothing. Good works does not make them legitimate. Their teaching does. And Jesus calls men like Brian Houston “lawless ones” (Matthew 7). Our opinion on this is that his track record also fulfills this criteria as an impostor of the Christian faith.

It is such a shame that Brian Houston has not been exposed by pastors in the past for his immoral and unethical teachings – specifically the doctrine on the tithe which has destroyed so many people financially. It is a con-mans doctrine that has been altered in such a way that it reflects the modern-day Amway money-making scheme (See Richard DeVos, Compassionate Capitalism – People helping people help themselves). Hillsong is simply a ponzi scheme with spirituality attached to it.

This article is a collection of media outlets that are concerned with the unhealthy focus Hillsong has on money among it’s many other issues. 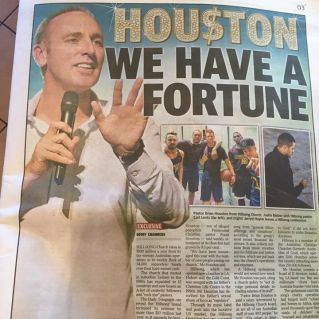 In reading these articles, remember that Brian Houston personally disclosed back in 2010 that he earned over $300k a year. The fact that he is not disclosing this information now makes us wonder if he is earning more cash from new recruited members (see the end of second article).

HILLSONG Church rakes in $100 million a year from its tax-exempt Australian operations as its weekly flock of 34,000 supporters hands over their hard-earned cash.

The church that started in suburban Sydney in the 1980s has expanded to 15 countries and now boasts an A-list of celebrity followers and “rock star” pastors.

The Daily Telegraph can reveal the Hillsong brand increased its revenue by more than $10 million last year as it expands its business operations.

Hillsong, which receives tax breaks as a religious charity, employs 584 workers and has thousands of volunteers.

“We have been encouraged this year with the number of new people joining our church,” Mr Houston said.

Hillsong, which has opened new churches in LA, Hobart and the Gold Coast, was merged with his father’s Christian Life Centre in the 1990s. Mr Houston has described his father’s sexual abuse of boys as “repulsive”.

A Belieber: Justin taking a selfie with a fan.

Through its music label and push into the lucrative US market, the Hillsong brand has become a magnet for celebrities, including singer Justin Bieber, NBA star Kevin Durant and NRL/NFL player Jarryd Hayne.

The Daily Telegraph can reveal more than $42.5 million was collected by Hillsong from “general tithes, offerings and donations”, according to the group’s most recent financial disclosure. It also collects millions from music royalties and its childcare and tuition services, which are put back into the church’s operations and expenses.

A Hillsong spokesman would not reveal how much Mr Houston was paid, citing a church policy to “not divulge personal details including salaries of its staff”.

“Pastor Brian Houston is paid a salary determined by the Hillsong Church board, as are all of our Australian staff of over 400 people,” he said. “His salary is determined independently, a decision that he is not a part of.”

The spokesman told The Daily Telegraph while the church believed in the “biblical principal of tithing (giving a percentage of income to God)” it did not force ­followers to make financial donations.

Hillsong Church holds a week long convention at Acer Arena in Olympic Park. Attendees gather outside during breaks from the activities.

Hillsong is a member of the Australian Christian Churches (formerly Assemblies of God), which operates 1100 churches across the country attracting more than 250,000 followers.

With over 34,000 members, the evangelical church continues to attract believers since its establishment in the early 80s, reported the Daily Telegraph.

As well as attracting celebrity members like Justin Bieber, the church has expanded to 15 countries and has reportedly increased its revenue by $10 million last year.

Operating as a religious charity, Hillsong receives tax breaks and employs over 500 staff as well as thousands of volunteers.

Senior pastor Brian Houston told the Daily Telegraph that the church had a weekly increase of 8.5 percent parishioner attendance.

‘We’ve been encouraged this year with the number of new people joining our church,’ said Mr Houston.

The Australian Hillsong church makes $100 million a year, according to recent reports.

The Australian Hillsong church makes $100 million a year, according to recent reports.

‘We’ve been encouraged this year with the number of new people joining our church,’ said Senior Pastor Brian Houston