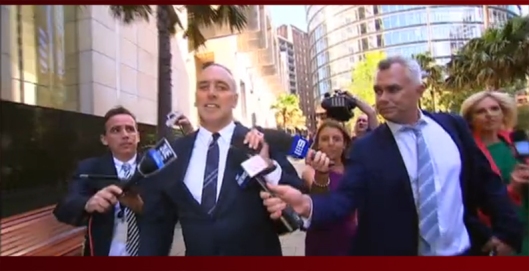 Before reading the below ABC article, please hear Brian Houston’s account of the scandal here.

Brian Houston: sins of my father….

According to Brian’s own words in the article above he did nothing when his father first confessed. It wasn’t until “12 or 18 months later” when a second victim came forward that Brian said he acted. Brian Houston said he waited until the “problem had grown” before he took it “to [his] denomination”.

But now new information has emerged from the Royal Commission. Why didn’t Brian Houston mention this victim at Hillsong Conference 2014?

“About two months later when the cheque had not turned up, AHA says he called Brian Houston and about two weeks later AHA received a cheque for $10,000 in the mail.”

ELEANOR HALL: The national child abuse royal commission opened its public hearings into the popular Pentecostal spiritual movement today. This inquiry is looking into how the movement’s leaders handled allegations of abuse in three Australian states.

It is also set to examine a scandal that went to the highest ranks of the Hillsong Church in Sydney and the commission has outlined the case of a Christian college teacher in Melbourne who was jailed for assaulting eight children during the 1980s and1990s.

Our correspondent covering the inquiry is Emily Bourke and she joins us now.

So Emily, are there specific allegations of misconduct by the leaders of this spiritual movement that the inquiry is considering?

EMILY BOURKE: Yes, there is Eleanor. This is the 18th public hearing and it’s being split into three separate cases.

The first to be heard is associated with allegations against the late Frank Houston.

He came to Australia from New Zealand in the 1970s and set up the Christian Life Centre in Sydney, which is really the first incarnation of Hillsong Church.

And as we now understand, the allegations against Frank Houston are not isolated to a single claim in New Zealand but quite a few in New Zealand and in Australia.

Crucial to this investigation is how senior church leaders, including Frank Houston’s son Brian, handled the complaints when they came to their attention in the 1990s and then came to a head in 2000.

This morning we heard that Frank Houston held a meeting with a complainant at a McDonalds restaurant and counsel assisting the inquiry Simeon Beckett gave some description of how that meeting unfolded.

SIMEON BECKETT: At the meeting, Frank Houston offered AHA $10,000 and said, I want your forgiveness for this.

About two months later when the cheque had not turned up, AHA says he called Brian Houston and about two weeks later AHA received a cheque for $10,000 in the mail.

There was no covering note.

Brian Houston is likely to say that he was told that there were in fact two payments to AHA totalling $12,000.

In February 2009, Brian Houston was provided with further allegations of child sexual abuse.

The evidence is likely to reveal that no allegations of child sexual abuse against Frank Houston have been referred to the police and no civil proceedings have been commenced in Australia.

Really quite an extraordinary story there, Emily.

What can you tell us at this stage about how the Australian Christian Churches handled these allegations in different states?

EMILY BOURKE: Well, they vary and they are a study of contrasts in some ways.

In Queensland, the Australian Christian Churches will be interrogated over how it dealt with the case of a youth worker, Jonathan Baldwin, who was jailed for assaulting a young man while he was counselling him.

But the royal commission is also looking at a rather disturbing matter out of Victoria and that’s associated with former teacher Kenneth Sandilands, fair to say a serial offender.

By the time his career ended there were allegations by no less 30 children and those allegations had been made to the church and the school over a 10 year period and yet more matters have since come to light, as Simeon Beckett explained.

SIMEON BECKETT: On the 22nd November, 2000 Mr Sandilands pleaded guilty to 12 counts of indecent assault and was sentenced to two years imprisonment with a non-parole period of 12 months.

Mr Sandilands appealed against the severity of his sentence but later withdrew the appeal.

Each of the offences occurred between 1970 and 1974 – some 10 years before he commenced at the college.

He was sentenced then to a further 26 months imprisonment.

The hearing will explore whether those at Northside Christian Centre or the college were aware of any such allegations when Mr Sandilands was employed in 1983.

ELEANOR HALL: And that’s counsel assisting again, Simeon Beckett, setting out the scope of the inquiry.

Now Emily, you have now got the witness list. Who is being called to give evidence?

EMILY BOURKE: We’ll hear from quite a few victims, either in person or through written statements.

Eighteen witnesses have been slated from across the Pentecostal Church, including the current senior pastor Brian Houston who is the public face of Hillsong in Sydney.

He’s put out a statement this morning saying that having to face the fact that his father engaged in such repulsive acts was, and still is, agonising.

We’re expected to hear from the state presidents of the Australian Christian Churches (ACC), the peak bodies in Victoria and in Queensland, and the national president of the ACC has also been called to give evidence.

The Guardian reporting on Hillsong & the Royal Commission

Brian Houston: sins of my father….