Do you sometimes question the things Brian Houston says or does at Hillsong? Maybe you are offended how he covered up his father’s pedophilia? Or how he lied about his father to his church, the media and the rest of the word? Maybe you are offended how Brian Houston condemns your church or your Christian friends so he can elevate his Hillsong movement?

Maybe you are offended with his scripture twisting? His financial scamming? His abusive behaviour towards other people? His bullying towards women who were asking for help or simply asking questions?

If you do have these types of questions, make sure you say nothing. According to Brian, you’re a hater. And according to Brian, this means he can’t wait to block you. (He admits he gets an adrenaline rush if he blocks haters like you.) 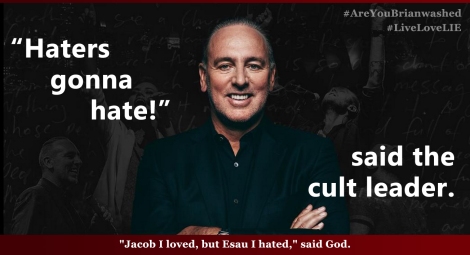 The Australian media have publicly labeled Brian Houston a megalomaniac. This kind of behaviour from Brian only confirms that he shows no stability as a pastor or even as a compassionate human being. We think “megalomaniac” is fitting. What are your thoughts on Brian Houston’s twitter comment?