(EDIT 29/04/2015: We have uploaded another Hillsong document which is a tithing envelope titled:

It comes with an out of context scripture from Malachi 3:10 [NKJV]. It is in this context where Malachi curses anyone who withholds their tithe to “God’s House” or “storehouse”. You can see this Hillsong tithing envelope at the bottom of this article.)

Hillsong released a statement in response to this A Current Affair report:

Not only did Hillsong issue to Senator Nick Xenophon mob-like threats, apparently “the vast majority of Australians” see the ‘A Current Affair’ report as “nothing more than tabloid trash.” So in response to the minority in Hillsong who read and believe “tabloid trash,” Hillsong writes:

Statement by Hillsong Church on A Current Affair story April 21, 2015

There was no factual basis whatsoever to the story on A Current Affair about Hillsong Church, and the program made no attempt to contact us to get the facts – or even hear our perspective – before airing this piece of fiction. The movie “Let Hope Rise” is being produced by an outside production company who approached us, and Hillsong Church has not invested one cent into this movie. Furthermore, we operate like any other church financially and support people pastorally across the world. This story was yet again, nothing more than tabloid trash and we believe the vast majority of Australians view it as such. It is disappointing that Senator Nick Xenophon, (who presents himself as a champion of the people) has cooperated with such stories for at least the third time. It is poor behaviour and worth noting by church-going voters and people at large in South Australia, who rightly expect their elected representatives to make comments based on factual information rather than conjecture.

There is a lot to extract from this statement. Especially the plethora of fallacious arguments and lack of evidence to back up Hillsong’s claims. However, more people seem to be sharing their experiences or insights into the corruption of the Hillsong cult.

This an insightful comment from a former AOG pastors wife:

My mate Tanya Levin did a brilliant job on ACA this week. She’s speaking again about the revenue raising juggernaut that is Hillsong ahead of the release the mega-church’s new Hollywood movie.

In my former life I was for a time an AoG (ACC) pastor’s wife. Even 25 years ago, Brian Houston was recognised in the movement as the one to watch. I can tell you that pastors of churches all around Australia dreamed of being able to count on collections like the ones Brian garnered. Over time Brian’s formula for getting folks to empty their pockets – a complex and emotionally powerful mix of music and clever sales patter with lashings of Jesus – was replicated in hundreds of financially struggling churches around the country and, eventually, around the world. As Tanya so beautifully puts it in this clip, “From London to Cape Town to Copenhagen the message is the same – give, give, give, give, give.”

Although the ACA team was forbidden to film the plea for money, I can tell you that the section of the ‘service’ specifically designed to predispose you to giving generously, runs for about 15 minutes and is the culmination of a cleverly orchestrated, high-production value, highly emotionally manipulative stage show. Those of us in the AoG who despised Houston’s methods had a name for it: fleecing the folk. Nobody does it better than Brian. The report estimates in 2012 Hillsong ‘earned’ $72 million dollars in tax-free income, only a tiny fraction of which is spent on charity work. These guys are crooks, plain and simple, and the Australian public is paying for it. Glad to see Nick Xenophon is trying to increase public accountability of this secretive money printing organisation.

Her views are worth considering Hillsong states that they “operate like any other church financially and support people pastorally across the world.”

Really? Do you want to know why those people in the ACA Report give 20% at Hillsong? 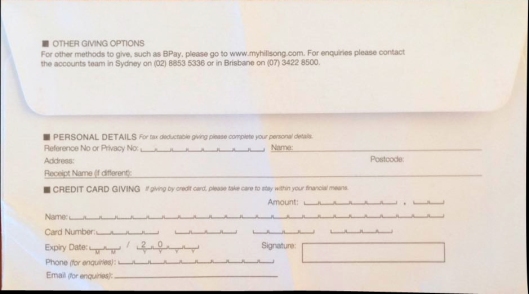 Does your church put out giving envelopes to you that are like this? Would you feel comfortable putting your credit card number on the back of the envelope where everyone can see it?

* Tithing is an anti-Christian teaching that uses Malachi 3:8-11 to teach that if you do not tithe, God will curse you.
* This envelope was collected from Hillsong and given to us at the beginning of January 2015. 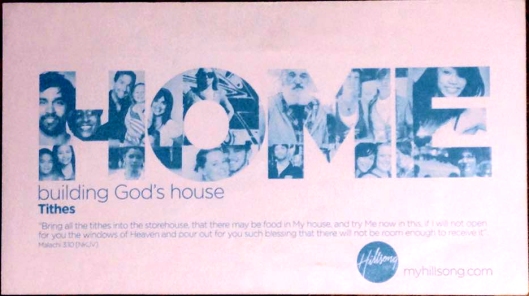