Christians seemed have expressed concern that Brian Houston endorsed the pagan (and rather demonic) film Noah.

“Even though Aronofsky didn’t have the final cut, Moore says Noah is consistent with the director’s initial version, and it has received a stamp of approval from Christian leaders like Geof Morin, executive vice president of the American Bible society, and Brian Houston, senior pastor of Hillsong Church, which includes thousands of congregants at a dozen churches around the world. Bock believes Christian audiences in general will embrace it as well. “What Darren has done is make this guy righteous and flawed, which is what is going to resonate with the Christian community.”

While I have not heard of Geof Morin, I have been reading news about Brian Houston in recent days with the Christian Post and the discernment ministry of Hillsong Church Watch. The  Hillsong Church Watch site rightfully warns about the false teachings coming out from showing how Houston taught that Christians and Muslims worship the same god. Yes, I read where Houston is trying to un-paint the corner he painted himself into but Houston did indeed say what he said then muddles things further by not admitting the error. For more on that news click here to read what Apprising Ministries has up. 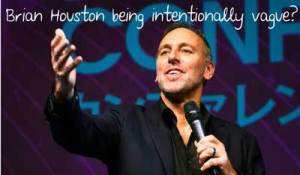 So what’s the big deal with Houston now? Rephrasing the quote above Senior Pastor Brian Houston of Hillsong, who represents thousands of church goers has helped to promote Noah, the latest of Hollywood’s Bible hacks further muddying the waters of what the Bible teaches.

Houston and those like him I suppose can filter around all of the garbage to where there is a reference to the Bible in Noah to find something biblical but then again Houston’s gospel message appears to have as much gospel as the movie Noah!

Any “…stamp of approval…” from a Christian leader should mean the movie does not twist, distort and pervert God’s word.

Considering the job Bible hacking that Darren Aronofsky does with Noah how can it get a stamp of approval from any Bible believing Christian much less from a ‘Christian’ leader such as Senior Pastor Brian Houston?