Ladies … if you’ve lost perspective and are having a meltdown over spilt milk or whatever, let this image remind you of what “hard” really is. #sisterhood #forsuchatimeasthis #sisterskeeper #helpthemJesus 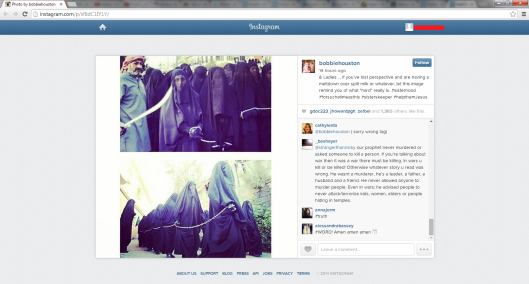 Quite frankly, it’s hard to know what is worse:

1. A pastrix proving she is unqualified to speak on such serious matters, setting off a firestorm of comments from Muslims on Instagram.

2. A pastrix who falsely promotes awareness about an “evil act” against women, at the same time plugging her “#Sisterhood” conference/movement.

So what is this image actually about?

Pastor Gervase Nicholas Charmley has this to say about the picture:

These pictures are well known, and (as the fact that the “guard” is carrying a sword rather than an AK-47 should indicate) are from a Shia religious commemoration called Ashura, which commemorates the battle of Kerbala. Part of Ashura is the re-enactment of scenes from the battle, one of which is the leading away in chains of the women and children. Basically it’s the Shia Muslim equivalent of a Passion Play, the re-enacting of a significant time in their history.

The women are all willing participants, who are playing the role of prisoners.

There is [also] an image from Ashura that has been circulating for a while with the caption “Muslim girls are led off in chains to meet their husbands”, a caption as ludicrous as it is false.

Speaking about the image, one commenter, Suheild says “I’m glad someone out there is educated enough to know the difference.”

We appreciate that there are followers on Bobbie Houston’s Instagram account prepared to point out the facts about the image. Exposing those who take liberties with the truth to create a false “outcry”, especially during a time of truly great suffering for both Christians and Muslims.

Ok everyone —so another day has passed and this timeline and post is probably history in everyone’s Instagrams. I hope you found some peace amid “the various dialogue” and that we considered the human heart at stake. These are crazy days. A world of diversity and contrast, a world in need of kindness and love. May God’s “good and kind and gracious and pure and compassionate and righteous and HOLY Spirit” overshadow all our thoughts and endeavors. Be blessed and like the saying goes … “go make the world (your world) a better place”. Selah. Xoxo

If there is anyone making these last days crazy, it’s uneducated “teachers” like Bobbie Houston. Her Instagram which promoted falsehoods was neither kind nor loving.

Even though she was corrected by those on her Instagram feed, don’t expect an apology from Bobbie. Instead Bobbie band-aids the harm she caused with an American Beauty pageant “world peace” response.

11 thoughts on “Bobbie biffs it again…”