For decades we have watched Hillsong act underhanded to Christians who question their practices and towards media who do their best to accurately report on the Hillsong movement. We are very concerned seeing similar games played by Hillsong behind the scenes to respected ministers and leaders.

Dr. James White is a respected Christian man in the field of discernment and apologetics. He sometimes weighs in on important church issues and recently decided to tackle the controversy surrounding Hillsong’s vague stance on homosexuality.

We wish to highlight what James White recently said on his show titled ‘Seer Stones, Hillsong Church, and KJVOnly Deceitfulness’:

“So when someone says, “Jesus never addressed this issue,” they’re just ignorant. They just don’t know what they are talking about. And Carl says, “I know that. I agree. And it was a combination of my not speaking clearly enough and them not following up with what I said afterward where I said those things.”

So, you know. Okay I hear you. Got it. Alright.

I tried to be- if I’m going to criticise, I want to try to be fair, and I want to try to be accurate. And the fact is, there are sources amongst conservative Christians that are trusted that shouldn’t be. We re-post stuff that isn’t always overally accurate. And my concern was exactly that. My concern was exactly that. Because, these are important issues. And when we are not- when we don’t do our homework and we just go with the twelve-gate shotgun blast from the start, we may think we are doing the Elijah thing. But in reality we are only hurting ourselves. Because then people can just focus on that and not focus upon what the real issue is.”

One has to wonder what Carl Lentz disclosed in that conversation with James White.

This is because we have the impression that Dr. James White had trouble finding the source of this quote from Carl Lentz and we find it odd that Carl Lentz didn’t give him the audio/source or apologise for his sloppy witness on the CNN program.

You can find this uploaded media presentation with the relevant quote (9:18-10:08) in the Poppy Harlow interview, on the ‘Pastor Carl Lentz’ YouTube channel.

Below the video, you can read:

Carl Lentz 2015 sermons | Carl Lentz sermons.
Directed by Carl Lentz
Be Blessed As You Grow In Grace And Knowledge and share the videos with your friends so that they maybe blessed too.

Just in case it may be pulled by Hillsong, here is another screen grab of this video from the ‘Pastor Carl Lentz’ channel (titled ‘Carl Lentz | Tattooed Megapastor Carl Lentz The Next Joel Osteen Mar 12,2015‘): 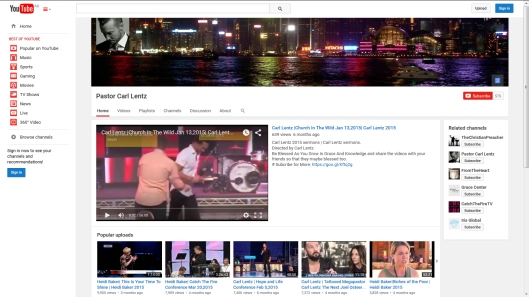 If Carl is protesting to James White “that it was a combination of [him] not speaking clearly enough and them not following up with what [he] said afterward where [he] said those things,” then why has he supposedly uploaded this video on his own YouTube channel?

[9:37-10:08] Carl Lentz: “Yeah, it’s a misquote because I do discuss it just not the way people want me to. When it comes to homosexuality, I refuse to let another human being or a media moment dictate how we approach it. Jesus was in the thick of an area where homosexuality, just like it is today, was wildly prevalent. And I’m still waiting for someone to show me the quote where Jesus addressed it on the record in front of people. You won’t find it because he never did.”

In Australia, Hillsong has been saying for decades that the media are great (only when they look good). However, whenever the Australian media report Hillsong peddling Word of Faith or prosperity heresy; reported on scandals; report on leadership abusing or ripping off it’s members financially, etc, Hillsong are quick to demonise, distort, defame and damn the media organisation.

When you watch the CNN media report, it is not tearing into Hillsong. This would make sense as to why Carl Lentz would record this and upload it. 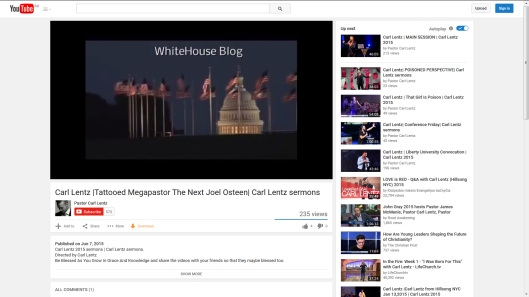 Now that he is being rightly condemned as being “ignorant” or “deceitful” by using that argument in the report, both Lentz and Houston are now defaulting to their typical defamation statements against the media, that being that they were taken out of context or misrepresented.

Thus Carl Lentz’ dialogue with White appears to be disingenuous in regards to the media misrepresenting him. [edit 11/08/2015] If he thought they misrepresented him to begin with, why did he [supposedly] upload that video to his YouTube account? [/edit]

Dr. James White, if you are reading our site, please understand that we respect your work and are perturbed that Carl Lentz was not upfront and honest with you about his views regarding homosexuality. We believe that if you are given well documented evidence against Carl Lentz, you will confront him for his rejection of God’s Word.

[Edit: Carl Lentz has responded to this which we will be addressing:

Carl Lentz  August 11, 2015 at 3:49 am
Hi! I actually don’t have a YouTube channel, so that’s unfortunate here in regards to your attempt to discredit me. Hard for me to upload videos on a site I don’t actually have. Make sure you do just a little bit of homework before you build your attack, might make it a little more believable. James white is a respectable man, who actually called to check facts. What’s funny is he actually talks about people like you the podcast you posted! Hilarious. In your eagneress to tear down, don’t rush the fact checking part. God bless you!